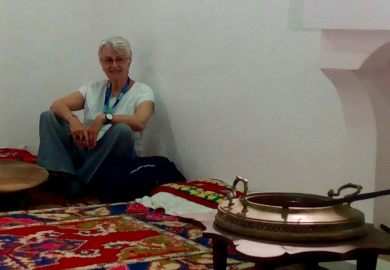 As an Islamic scholar who studied Islamic art history as a minor subject, I have followed the work of the Museum for Islamic Art with great interest for many years. I have been a member of the Association (FMIK e.V.) since 2009.

Professionally, I was regularly in close contact with the cultures and societies of the Islamic-influenced world. After completing my doctorate on the subject of medieval Arabic pharmacy, I became a research assistant at the Orient Institute in Beirut and Istanbul. Subsequently, I was editor of the journal Spektrum Iran. After moving to the Conference of Ministers of Education and Cultural Affairs, I headed the International Affairs Department for several years.
Due to government negotiations, I travelled frequently to the Middle East. After another change, the Ministry for Economic Cooperation and Development (BMZ) sent me to the German embassies in Yemen, Jordan, Burkina Faso and Benin. There I was in charge of the Economic Cooperation Department. I worked voluntarily in the association "Flüchtlingspaten Syrien e.V." and I'm regularly active as an election observer for the OSCE and the EU.

The FMIK e.V. supports the Museum for Islamic Art in its public mission to impart knowledge about the art, architecture, archaeology and culture of the multi-layered Muslim societies. When I was elected to the Board, I was tasked with expanding the circle of action to include organisations from the fields of education, science, society, politics and business. I am very happy to take on this task.